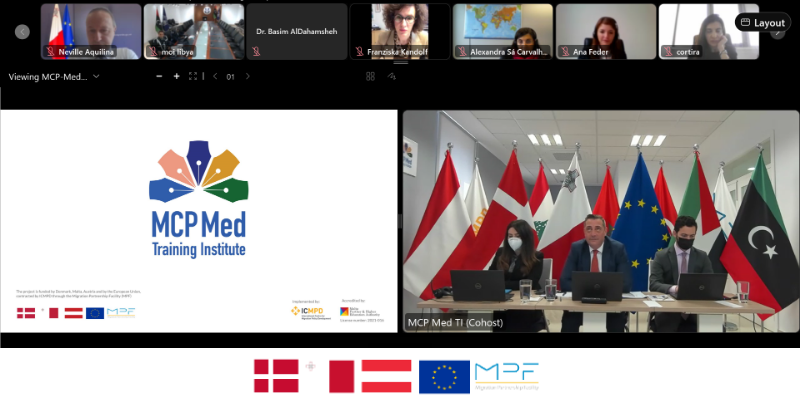 The Training Institute on Migration Capacity Partnership for the Mediterranean, held its first Governing Board meeting on the 7th of April, 2022. Chaired by Malta, the event took place online with the presence of representatives from ICMPD, donor and partner countries, observers, and EU agencies.

The Governing Board consisting of Austria, Denmark, the EU (Directorate-General for Migration and Home Affairs), ICMPD, Jordan, Libya, and Malta was joined by its technical partners, the European Union Agency for Asylum (EUAA) and Frontex, as well as prospective future members from Germany, Greece, Hungary, Lebanon, Switzerland, and Tunisia. Representing Malta as Chair, Mr. Neville Aquilina, the Director-General for Global Issues (International Development & Economic Affairs), from the Ministry for Foreign and European Affairs of Malta, opened the event and remarked that the Training Institute ‘takes a new look at an old issue, redefining migration partnerships under the concept of Capacity Partnership – working together to achieve improved results for all.’

Mr. Aquilina was followed by Mr. Julien Simon, Head of ICMPD’s Mediterranean region, who similarly conveyed in his address the importance of Migration Capacity Partnerships, stating that the MCP Med TI is ‘a real partnership where all, whether they be EU or non-EU, public, non-governmental or private sectors are equal partners committed and able to improve vocational migration training’.

Mr. Adrian Cooper, the Head of the Training Institute, subsequently presented the key milestones achieved thus far and underlined that the MCP Med TI is an EU-licenced Further Education Institute capable of offering quality-assured learning experiences for migration actors in the Mediterranean region – a first for ICMPD. He also announced that its purpose-built facility has now been fully renovated. Additional developments included the ongoing establishment of the Institute’s own state-of-the-art Learning Management System along with internal mechanisms for course development/delivery and quality assurance.

The project is funded by Denmark, Malta, Austria, and by the European Union, contracted by ICMPD through the Migration Partnership Facility (MPF). For more information, please visit the MCP Med TI’s dedicated webpage and LinkedIn account.